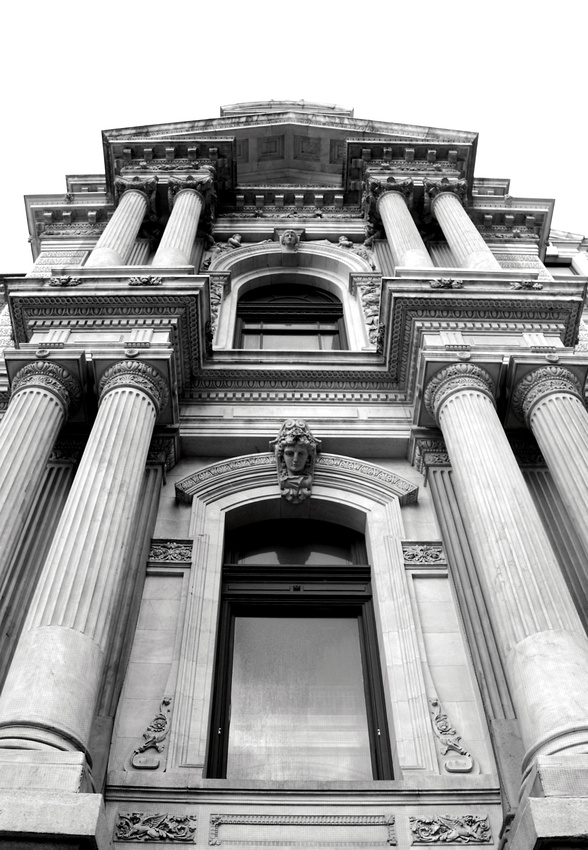 Last Sunday, some friends and I got together and did a day tour of Philadelphia. We left NY around 8:30am and got to downtown Philadelphia by 11am. First, we toured Eastern State Penitentiary. It was once the most famous and expensive prisons in the world, but stands today in ruin as a haunting world of crumbling cellblocks. We toured the prison for a good three hours. Thereafter, we drove to the heart of Philadelphia and had lunch at a cozy spot blocks away from Independence Hall. We continued the tour by visiting the Liberty Bell, Independence Hall, the Love Monument, Constitution Center, City Hall and the famous Rocky steps at the Philadelphia Museum of Art. Suffice it to say, we were all spent on the drive home.

This shot was taken at one of the four entrances to Philadelphia's City Hall. I stood 10 feet away from the base of the building and aimed my camera upwards to capture this shot. I tried to get as much of the lower columns as I could, while still capturing the upper most tip of the building. I converted the image to black & white in Lightroom to add a dramatic look. I decreased the blacks and increased the highlights to add more contrast to the smaller details embedded within the columns and windows.

Additional photos can be found here.